When researching wildlife rehab centers to intern at this summer, FCW was definitely not what I had in mind. I imagined being surrounded by a few other interns and volunteers in a big facility, doing mostly grunt work – like cleaning cages, and scooping poop. After spending a summer at FCW, however, I could not imagine working in a bustling environment like that. There were times when being the only intern or volunteer on some days was difficult, like when there were four opossums or rabbits to tube feed twice a day, on top of the normal daily tasks. However, the fact that I gained enough experience to be able to tube feed baby animals unsupervised was more than I could have asked for. 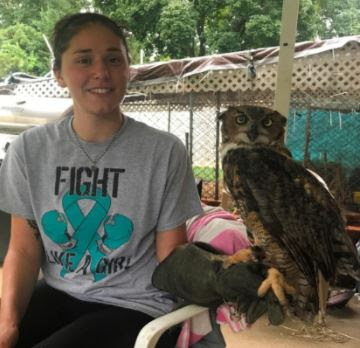 One of the highlights of my summer was when we received nestling screech owls. I have always known that I love raptors; each species has their own unique ability and watching them soar way above the trees has always been something I loved to do. So when the owlets came to us I was so excited to care for them and watch them grow. Although at first the two birds did not seem too interested in each other, after a few weeks, and many less downy feathers later, we reintroduced the owls to one another. They eventually grew on each other, and watching them in their outside enclosure together my last few weeks was so much fun. They’re normally snuggled up in the corner together, one preening the other, or bobbing their heads in synchrony as I talk to them or put their food in for them.

Along with my internship at FCW, I also was lucky enough to get an internship at the Philadelphia Zoo. This was more of the college internship experience I was expecting: over one hundred other interns and many staff members hectically running around the zoo to make it to our next station. The environment at the zoo was definitely fun, and it was a great way to meet a lot of crazy animal people like myself, while still learning a great deal of information. During my time at the zoo, I got to know most of the animals on a first name basis, and learned loads of fun facts about all of the different species that live there. It was a completely different feel than my internship at FCW, but it was great to get a taste of both types of work spaces. Working six days a week was exhausting at times, especially when I was working outside in 90+ degree heat at the zoo, or in the rehab hospital at FCW. However, I was so lucky to have received such amazing opportunities that it was hard to let myself complain about the small things.

Before my internships began, I was hoping to gain insight as to what kind of environment I was more comfortable in, so that it could guide me as to what kind of path to take in the future. After working at FCW, and being able to work with one of their vets for a few days, I found that I am very intrigued with the medical aspect of animal care. I am still unsure of exactly what I want to do when I finish at Rutgers, but I know that this experience will influence my decision. I extend a huge thank you to Ruth Brooks at FCW, and all of the awesome volunteers that I met this summer, for making this internship a great one.