One in 250 New Jersey vehicles would collide with a deer in 2016. This prediction came from a study by State Farm Insurance. One early evening last October, I came upon an injured doe on a suburban road in south Jersey. I pulled over to see what I could do. I called 911. Several others stopped as well. The police arrived. I wish I could say we were able to save that deer, but we could not. I learned a lot that day. And I’d like to share what I discovered.

There’s an over-abundance of deer in New Jersey and much of North America. That’s from the human perspective. From an ecological point of view – we’re in their territory. As more people move into and build in former forested areas, the deer have less room to roam. We’ve also eliminated most of the natural predators that kept deer populations in check. Deer run across roads – especially in October, November and December. Cars hit them. Deer rarely survive these encounters. 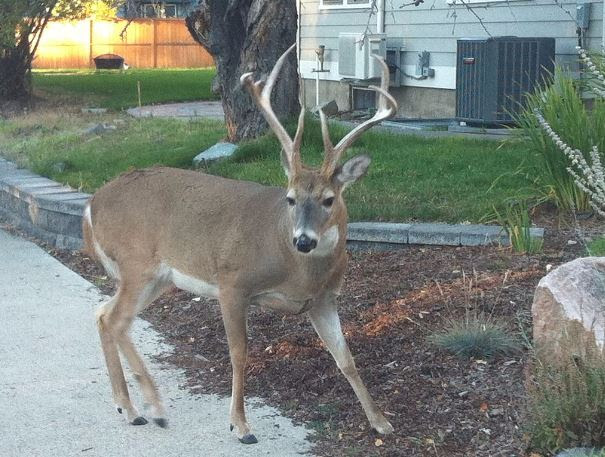 In the incident described here, it appears no people were injured. The vehicle that hit the deer was gone when I got there, and there was no evidence of broken glass or metal. While we waited for police, one good Samaritan carried the deer from the road and placed her in grass on the shoulder. Another put his arms around the deer to keep her from trying to run back on the road, and he gave her pats to comfort her. During this time, I was texting and talking with my fellow board members for help and information.

FCW is not licensed to accept deer. I had tried to find another center or veterinarian that did. Most were already closed for the evening or did not treat deer. Eventually the police had to shoot the deer as the humane thing to do. And that is their training. A hunter was one of the good Samaritans who stopped. He arranged to take the deer afterwards to his butcher, so that she would not go to waste. His wife waited in their vehicle – on the phone with their daughter, a vegan. It was emotional for all of us. One thing I learned later is that the deer was already in shock. And when we humans touch a deer – even though done with good intention – that touch can cause the deer’s body to begin to shut down. It’s called capture myopathy and it’s irreversible. I learned that a better way to comfort and calm the deer would have been to cover her head and eyes with a towel.

Our center president, Ruth Brooks, also recounted a valiant effort she was a part of while rehab manager at another wildlife center. That organization was licensed to take in injured deer. They tried to deliver and save twin fawns after the mother was hit by a car; but the effort failed as the fawns were premature. They even tried mouth to mouth resuscitation. Perhaps it would have been more humane to euthanize the animals at the beginning. These are very difficult choices.

In the days that followed, I began to investigate deer whistles. These are devices which attach to the front grill of the vehicle. There are two types – ones which operate on wind rushing through the device as the vehicle moves, and others which create sounds electronically. In theory, the ultrasonic whistle alerts the deer that a vehicle is approaching. Manufacturers claim the deer will react by running away. Unfortunately, no one has trained deer to fear or run from whistles. In nature, their predators stalk silently. I was disappointed to learn that studies show the whistles do not work. Other creative solutions involve over-the-road bridges or under-the-road tunnels to provide safe crossings for wildlife. Sometimes these are coupled with fencing along roadways to channel the animals to the safe passageways. One bit of advice I found was for drivers to pay special attention at dawn and dusk – when deer are most active. Deer travel in herds. So, when you see one, be alert that there are likely others nearby – perhaps on the opposite side of the road. Fall mating season, or rut, is when deer are most likely to run across roads.

When traveling through wooded areas at these times, cars need to slow down, and drivers can scan the shoulders where deer often congregate. Why would deer hang out so close to roads? It seems they like to eat the tender plants that grow after vegetation has been cut or cleared as often happens on the edges of roads. Another tip: it seems that deer tend to follow the same pathways repeatedly. If you’ve seen deer in a certain area, be alert that they’ll probably be there again and again. Pay attention to those deer crossing signs.

Hunters play a role in thinning herds. And some scientists advocate providing birth control to slow deer population growth. When there are lots of deer and reduced grazing areas, getting enough food becomes a problem for these beautiful animals. Malnutrition can lead to disease. Some diseases can spread to other animals and even to humans. There are no easy answers.

If you come across an injured deer, euthanasia may be the best solution. So, call 911 and your local officers will put the animal out of its misery. Then, like me, you can go home and cry. After that, channel your energy into helping save other wildlife by volunteering for and/or donating to non-profits like FCW. Ruth and her dedicated volunteers have a great track record of saving and rehabilitating injured and orphaned birds and small mammals. We welcome your support!