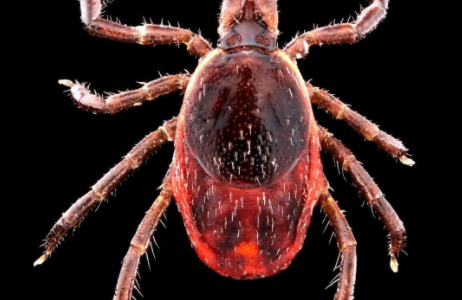 While a lot of tick bites will not cause much trouble, some ticks can pass on bacteria that can make you very sick. Two of the most well-known diseases are Lyme (caused by Borrelia burgdorferi and B. mayonii), and Rocky Mountain Spotted Fever (caused by Rickettsia rickettsii). Other tick diseases found in the Mid-Atlantic region include: anaplasmosis, B. miyamotoi disease, ehrlichiosis, babesiosis, Powassan virus disease and R. parkeri rickettsiosis. Depending which tick species latches onto you, the bacteria they carry can be transmitted within minutes or hours or even days. One good source of information on tick species is the New Jersey Division of Fish and Wildlife (https://www.state.nj.us/dep/fgw/tickinfo.htm).

If the tick has not yet attached to you, you can grab it with a tissue or gloved hand. If the tick has attached, and you are going to remove it yourself, use a tweezers to grab the tick close to your skin, and slowly and gently remove it. Try not to squeeze the tick as you pull it up and out. Squeezing could cause the tick to release disease-laden saliva into your body. Similar releases can be caused by touching an attached tick with a hot match, or trying to smother it with nail polish or Vaseline. That is why these methods are to be avoided.

Experts at the Mayo Clinic recommend that you seal the removed tick in a container and perhaps put it in the freezer. Don’t touch it with your bare hands. If it seems you are getting sick, you may want to bring the tick to your doctor for examination. Mayo Clinic recommends you seek immediate medical care if you develop a severe headache, difficulty breathing, paralysis, or heart palpitations. They say you should also be concerned if you can’t remove all of the tick, the rash gets bigger, or shows a “bull’s-eye.” It may take up to two weeks for a bull’s-eye to appear.

The New Jersey Department of Health advises people to be watchful and take precautions to avoid being bitten by ticks. They have many resources available on their website including guidance to specialized testing labs for rare diseases that may not be handled by commercial labs.

For more common diseases, companies like Eco Lab out of Massachusetts will identify the tick for a fee, and tell you what bacteria it may be carrying (https://ticktests.com/). The New Jersey Department of Health also has a feature connecting you to a free Tick App – available on smart phone or laptop. People all across the country can enroll. Then you can report a tick bite, or track tick activity in your area, or in places where you plan to travel.

The Tick App has a section with advice on how to avoid tick bites. For people, they advise not walking through leaf litter piles and long grass. Wear a long sleeve shirt and pants – all in light colors. This makes ticks easier to see if they land on you. The App also says to, “Wear permethrin-treated clothing, [as] it both repels and kills ticks upon contact.” But, they caution, “don’t put permethrin on your skin.”

The Tick App also discusses using insect repellants on your skin or clothing. Though these do not kill ticks, they will repel them. The App reports some good choices are, “… products with 20% or more Picaridin, DEET, IR3535, Oil of Lemon Eucualyptus (OLE), para-menthane-diol (PMD), or 2- undacanone…”.

According to an article in The Spruce, there are also natural scents that appear to repel ticks such as lavender, peppermint, citronella, lemongrass, cedar, rose geranium and citrus (“How to Repel Ticks Naturally” by Erin Huffstetler, Updated 05/25/20). After you have been outdoors in possible tick-infested areas, the Tick App recommends you shower to wash off ticks and search your body – with special attention to your scalp, armpits, belly button, back of knees and groin. They advise that you can also kill ticks on your clothing and gear by tumbling them in a dryer on high heat for at least an hour.

The Tick App further advises that, “Pets can get tick-borne diseases too …”. Pets can be treated with tick repellants. Make sure you use the appropriate ones for your dog or cat. Check your pet for ticks. Pay special attention to their ears, eyelids, between their toes, under their collars and to their genital areas, which attract ticks because they are warm. While tick-borne diseases are not passed directly from pet to human, pets can be carriers of ticks. The ticks can then travel from the pet and attach to the human.

There are several websites, which can help you identify ticks. They can also pinpoint their active months, and the areas where they are typically found. At one site, run by the University of Rhode Island, you can submit a photo of a tick, and they will help you identify the type (https://tickencounter.org/). This site also has many helpful features – including an interactive map that helps you see where ticks are currently active.

The CDC at the US Department of Health and Human Services has an excellent guide to tick identification and disease symptoms. For the current edition, see: Tickborne Diseases of the United States – A Reference Manual for Healthcare Providers Fifth Edition, 2018.

So what are the wildlife species that carry ticks in New Jersey? For Lyme disease, carriers include: white-footed mice, chipmunks, rats, squirrels, moles, voles, some birds and of course deer.

There are also wildlife species that reduce the tick population. For instance, owls eat rodents that carry ticks. And because opossums are good groomers, they eat a sizable number of the ticks that land on them. There are also many birds, – including chickens, wild turkeys and the imported African species of guinea fowl – which eat large quantities of ticks.

At the University of Maine, the Cooperative Extension Tick Lab (tickID@maine.edu) looks into natural species, which control for ticks. They note that these biological controls help counter the, “… increasing costs of chemical controls, and potential resistance of ticks to pesticides.” Some examples, which the Cooperative Extension is currently investigating, include parasitic wasps (Ixodiphagus hookeri) and nematodes. Even more promising is the pathogenic fungi, Metarhizium anisopliae.

In another tick-related study, the Morris Animal Foundation funded senior investigator Dr. Hillary Young, Assistant Professor of Ecology, Evolution and Marine Biology at the University of California, Santa Barbara. Dr. Young’s data showed, “that when large wildlife were excluded from defined areas, tick populations rose by 130 percent to 225 percent depending on the dryness of climate.” (Georgia Titcomb et al, Interacting effects of wildlife loss and climate on ticks and tick-borne disease, Proceedings of the Royal Society B: Biological Sciences (2017). DOI:10.1098/rspb.2017.0475).

The take-away here seems to be that natural ecosystems help keep ticks in balance; while interfering with these systems, allows ticks to flourish. Though ticks are small creatures, they can have a big effect on human and animal health.